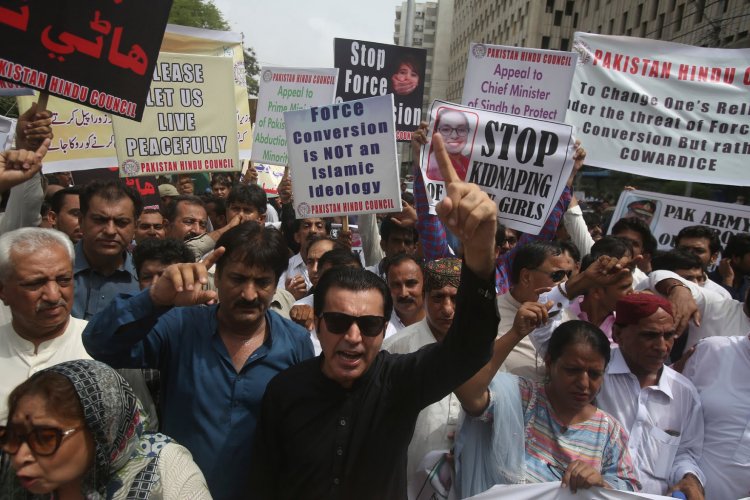 The “Prohibition of Forced Conversion Act, 2021” has been rejected by the Ministry of Religious Affairs and Interfaith Harmony on September 24th. This draft bill has been prepared by the Ministry of Human Rights in light of the recommendations of the parliamentary committee constituted in 2019 to protect minorities from forced conversions. The objections pointed out by the religious affair ministry have sounded controversial because the bill has been already shared with the Ministry of Religious Affairs in July of this year, and the ministry had already given its input and feedbacks.

The Ministry of Religious Affairs raised concerns to the fact that any non-muslim adult able and willing to convert will apply for a conversion certificate from an additional sessions judge of the area. Secondly, additional sessions judge would set a date for interview within seven days of receipt ensuring the genuineness of the choice, and he may award a time period of 90 days to allow a period of comparative study of religions. The ministry’s objections on these safeguards reflect antipathy for minorities.

Forced conversions in Pakistan is a particularly delicate problem, considering the several cases reported in the past years, a general neglectful attitude from police and judicial officers, and a lack of response from the government. Forced conversion is a violation of fundamental human rights and religious freedom, as stated in the article 18 of the Universal Declaration of Human Rights (UDHR). Furthermore, article 20 of the Constitution of Pakistan guarantees the right to profess, practice and propagate religion to all citizens, including the minority religious denominations.

There have been precedent attempts to introduce a dedicated law on curtailing the tide of forced conversions which didn’t succeeded. Two bills, tabled respectively in 2016 and 2019, were shot down by the same ministry that blocked this same draft bill. The government and the opposition parties should fulfil their duty to protect minorities by legislating and enforcing a powerful law to stop forced conversion.

Financial Action Taken Force (FATF) Will Fail in Its Duty if It Delays Blacklisting...

Growing terror against women in Turkey as the government...