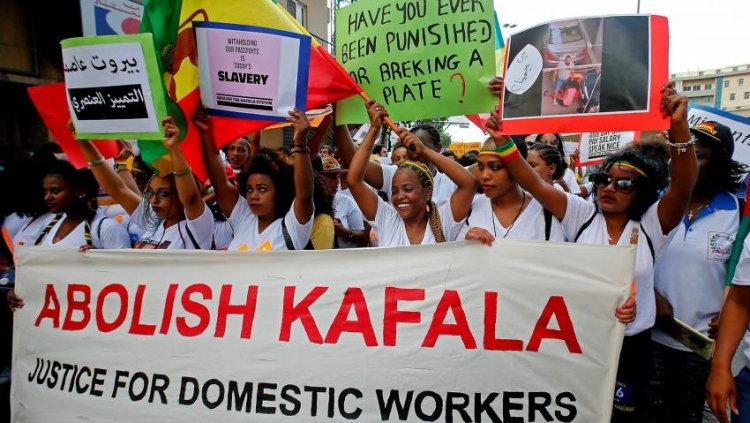 With the fast-paced economic and architectural growth in the middle east, one is left to wonder how countries like Qatar, Saudi Arabia and the United Arab Emirates keep surpassing their previous achievements. Buildings, cities and countries are built in a few decades from nothing, in the middle of the driest environments of our planet. The reasons behind this astonishing growth and expansion are, however, not as positive as it might seem.

The kafala system, a practice developed in the 1960s and 1970s, is a sponsorship system allowing non-nationals to enter and work in countries like Qatar. However, the workers are tied to their specific sponsors, or kafeels, for the whole duration of their contract. As long as the worker is under a kafeel, he cannot enter or leave a country, resign from a job or transfer employment without the specific permission from the employer. The worker is put in an extremely vulnerable situation and is barely enjoying any rights on his own, as their freedom of movement is restricted, their passports are taken, their salary payments are often delayed, the workhours are extended as well as no medical coverage. All these conditions induce situations of forced labour and human trafficking, as many workers die of exhaustion on the job.

In recent events, the kafala system was put under scrutiny by the International Labour Organisation (ILO), which issued recommendations that might have offered a number of benefits to workers and their employers. Qatar was one of the first countries in the region allowing migrant workers to change jobs without their employer’s consent, given that certain conditions were fulfilled. Whilst this seems like a good start to the abolishment of the kafala system, businesses in the region were not convinced.

The Minister of Labour, in a meeting, reiterated that the transfer of sponsorship is still subject to rules, controls and procedures preserving the rights of all parties. A chilling statement considering the limited rights accorded to workers under the Kafala system. This statement, with the 2022 World Cup approaching, leaves a number of questions on Qatar’s commitment to its agenda.

For the last 11 years, Qatar has been preparing for one of the most controversial Football World Cups to date. From the onset, there have been discussions on ongoing corruption, money laundering, the rights of LGBTQ+ fans as well as the logistics of accommodating an event of this size, as well as playing games, with 40 degrees Celsius. It is reported that since December 2010, the night when Qatar officially won the right to host the event, more than 6,500 migrant workers from India, Pakistan, Nepal, Bangladesh, the Philippines and Kenya have died for the construction of the infrastructure of the Qatar FIFA World Cup. In average, this equals to more than 10 deaths every single week since that night in 2010. These numbers are, unfortunately, most probably incorrect and it can be assumed that the actual death toll is much more than officially known.

In the last years, there have been many voices and concerns raised as to the human rights conditions and violations occurring in Qatar, and other countries using the Kafala system. The incredibly fast growth the Middle East has experienced in the last 50 years would not have been possible without a number of questionable working conditions, and it does not seem like it is going to stop in the foreseeable future. Whilst the planning for the World Cup continues, some of the hotels, stadiums and cities, such as Lusail, are still not habitable, but most likely will be – as one of the biggest events worldwide is expected to be hosted there in just over two years.

Golden opportunity for EU to take global lead on human...

Report into shooting of Indigenous man shows desire for...