Human rights defenders in the Philippines under threat 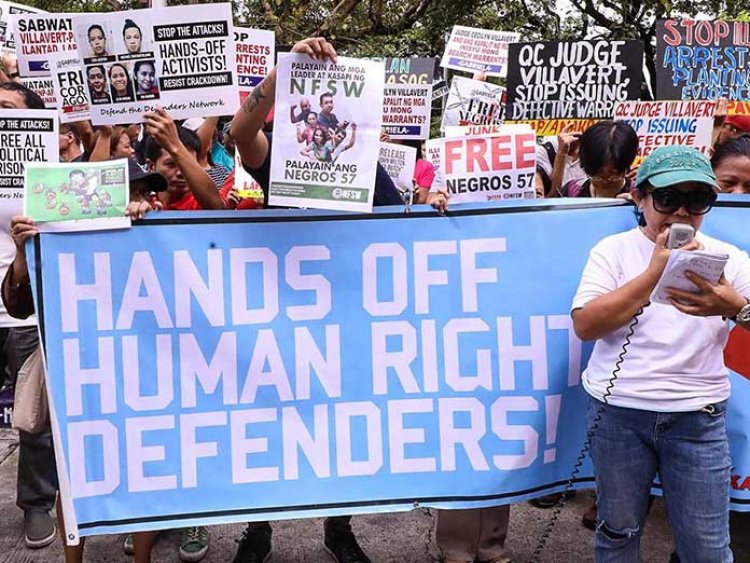 According to the Human Rights Commission of the Philippines, “the President through his pronouncements created a dangerous fiction that it is legitimate to hunt down and commit atrocities against HRDs because they are enemies of the State.” Defenders of economic, social and cultural rights who courageously persist in their work despite the threats can face extra-judicial harassment of extra-judicial killing. The data collected by the human rights group Karapatan show that 182 activists and human rights defenders have been killed between July 2016 and June 30, 2020. An additional 136 people involved in activism or grassroots work, especially farmers involved in land rights movements, were murdered during that period.

In August 2020, International civil society organizations and UN bodies were outraged at the killing of two human rights defenders. Randall (Randy) Echanis, aged 71, was a long-time peasant leader. He had participated as a peace consultant in the talks between the National Democratic Front and the Government. He had also chaired the left-wing Anakpawis party-list and helped to set up the national human rights advocacy organisation Karapatan. Reports indicated that Echanis was first tortured and then killed in his apartment in Quezon City, just outside Manila.

In the same month, another long-standing human rights defender, Zara Alvarez was shot dead by an unidentified gunman near her home on Negros Island, South-East of Manila. Alvarez, 39-year-old, was an advocacy officer at the Negros Island Health Integrated Program, a member of the Board of Trustees of the Council for Health and Development and a legal worker for Karapatan. She had been advocating for landless peasants and agricultural workers’ rights in Negros for many years. She was also detained for nearly two years between 2012 and 2014, on murder charges, which were later dismissed for lack of evidence. During the Covid-19 pandemic, Alvarez conducted relief operations as part of a community health program, despite receiving repeated threats to her life and safety.

The government has promised to investigate the murder cases, specifying that they will look into the victims’ affiliation with alleged “leftist groups,” as a possible lead for the attack.
Alvarez was the 13th member of Karapatan to be assassinated during President Rodrigo Duterte’s administration. It appears that Karapatan has been a particular target of the Philippines’ security forces because of its alleged links to the half-century-old communist insurgency. The Department of Justice also released a report linking Karapatan and other activist groups to the communist movement in the Philippines.

In addition to this, human rights defenders Echanis and Alvarez’s deaths come just weeks after Duterte approved a controversial anti-terror legislation. The legislation allows for warrantless arrests and longer detention without charges - provisions that legal experts warned could be directed at anyone.

Immediately after the murder of Alvarez, her colleague at Karapatan Clarizza Singson received a death threat on Facebook warning her that she would be next. In this regard, the OHCHR’s spokesperson Liz Throssel said that as Singson’s name also appeared on the abovementioned list and her photo was also included in the same poster .

“The international community is still watching”
International human rights organisations such as Global Witness, Frontline Defenders, Human Rights Watch and Amnesty International have regularly reported on the appalling human rights situation in the country. According to a recent report by Frontline Defenders, in 2019, the Philippines was the deadliest country in Asia for land and environmental rights defenders and second only to Colombia worldwide.

After these two most recent killings, messages of outrage and solidarity poured in, both from international civil society organisations and UN bodies. In the High Commissioner for Human Rights’ report presented at the 44th Human Rights Council, it was noted that the “OHCHR has verified the killing of 208 human rights defenders, journalists and trade unionists, including 30 women, between January 2015 and December 2019.” The report was also extremely critical of the proposed new Anti-Terrorism Act that had been submitted to President Duterte for signing into law as it “dilutes human rights safeguards, broadens the definition of terrorism and expands the period of detention without a warrant.”

In light of this reports’ findings and recommendations, a group of 35 NGOs issued a statement calling on the UN Human Rights Council to launch an independent, international investigation into the situation, clarifying that “anything less would not only be an insult to the victims and their families but send a green light to perpetrators that they can continue with impunity, with disastrous consequences on the ground.” That call remains today unfulfilled. Still, the dramatic deterioration of the human rights situation in the Philippines is being closely monitored internationally.

What is the UDHR? Why is this important for everyday life?

Freedom of Press in Sri Lanka