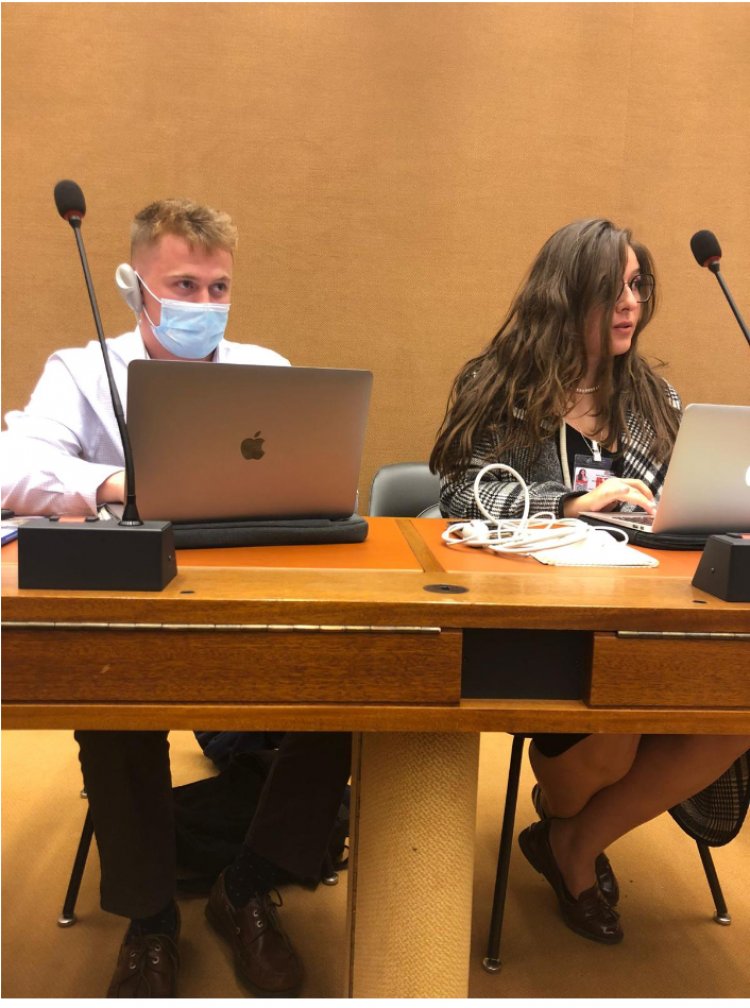 (Picture taken by our Social Media Team representing in Geneva)

The 51st Session of the Human Rights Council included an NGO side event highlighting the multitude of human rights abuses occurring in Zimbabwe. Convened by 'CIVICUS - World Alliance for Citizen Participation, and including keynote speakers Roselyn Hanzi (Zimbabwe Lawyers for Human Rights), Lisa Majumdar (United Nations Advocacy Officer, CIVICUS), and the Special Rapporteur on the Rights to Freedom of Peaceful Assembly and of Association, Clement Voule.

The event sought to focus on the shrinking space for civil society activism and opposition as well as government repression of civil society organisations more generally. The Permanent Representative of Zimbabwe to the United Nations Office in Geneva, Stuart Comberbach, also attended to offer his thoughts on the statements and claims raised by the speakers.

The session focused primarily on the government's recent Amendment to the Private Voluntary Organisations (PVO) Act. All three speakers emphasised that this act sees opportunities to seriously infringe on freedom of association and civil society collaboration. The Amendment, which is currently being scrutinised by community-based public hearings, would allow increased interference in the activities of civil societies (reference) primarily through forcing organisations to apply for government approval for any 'material change' in their structure.

With this, the Special Rapporteur noted that the Act would allow the government to label organizations as either 'vulnerable' or  'high risk' to terrorism abuse and consequently restrict or outlaw their activities. Most notably, the Amendment states civil society groups are outlawed from 'engaging in political activities’, yet it remains unclear what this implies due to a distinct lack of definitions. Roselyn Hanzi made a specific effort to note how this would give sweeping and unchecked power to the executive arm of the state and that it is tantamount to "legislative regression."

The PVO Amendment should be viewed within the context of a May 2020 report by the Special Rapporteur following his official visit to the country in September 2019. The report was aimed to assess the current state of the right to freedom of expression and assembly in Zimbabwe. It concluded that new legislations introduced by the Zimbabwean government, notably The Maintenance of Peace and Order Bill (MOPO), are not in line with its commitment to the International Covenant on Civil and Political Rights (ICCPR) which guarantees the right to protest and to freedom of assembly. In his talk, Voule began by highlighting the importance of civil society and civic participation for advancing democracy more generally in Zimbabwe. He noted that there had been a distinct lack of meaningful dialogue and engagement on behalf of the government to allow opposition voices to be heard. Hanzi also emphasised on the list of journalists arrests and the state's constant surveillance of civil society groups, thereby using intimidation tactics. This becomes all the more critical when viewing the upcoming national elections in 2023, leading to increased polarisation in the country at both a political and civic level.

Following this, Lisa Majundar, Representing CIVICUS, noted the importance of her organisation's recent work in Zimbabwe. CIVICUS independently monitors and tracks levels of civil society repression and has recently put Zimbabwe on its 'watch list'.' Her main concern was Zimbabwe's backsliding toward repressive tendencies in the elections. For example the deliberate action by the government to close democratic spaces which takes away the opportunities to challenge the government. Finally, she provided some recommendations and concrete actions that can and should be taken to prevent backsliding into repressive techniques:

However, despite the evidence-based claims of all three speakers, Zimbabwe's Special Representative to the UN attempted to make a case for his government. Stuart Comberbach initially thanked the speakers before making clear his opposition to the report's findings and the claims of shrinking democratic space in the country. He attacked the report's methodology, stating there was minimal inclusion of the government's position and overly favoured their opponents' voices. This was followed by stating that the government's treatment of civil society organisations was based on a principled commitment to provide order in the country. With this, he argued that the PVO will improve conditions for civil society organisations and is "no reason for alarm".

With this event, two different parties were given the opportunity to speak on their behalf and to share both positions on the Private Voluntary Organisations (PVO) Act. On behalf of Global Human Rights Defence we want to thank the speakers and CIVICUS - World Alliance for Citizen Participation, for hosting this event.

Five Tibetan Men Arrested, One of Them Dies as a Result...