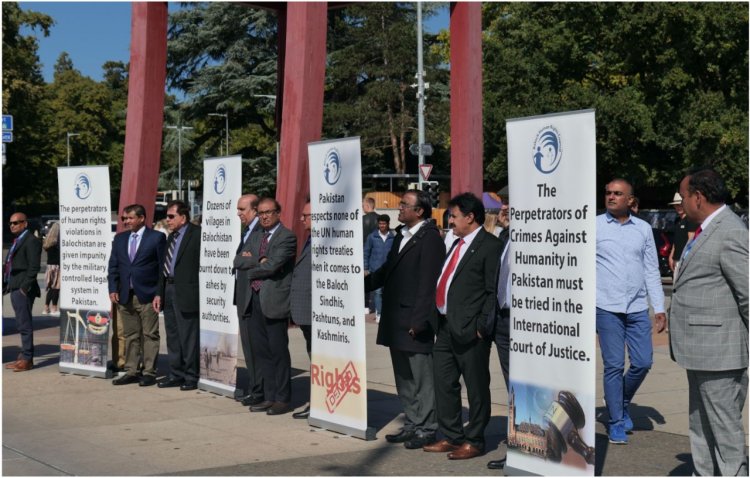 On September 21st, in front of the Broken Chair at the UN Headquarter in Geneva, the Baloch Human Rights Council (BHRC) organized a protest to give voice to the thousands of Baloch victims of human rights violations allegedly committed by the Pakistan government. BHRC is an international non-profit and charitable organization based in London, which aims to raise awareness of the current Baloch human rights crisis and campaigns for ‘national self-determination for the people of Balochistan’. BHRC is a close partner of Global Human Rights Defence. The BHRC especially highlighted their persistent and ongoing efforts to bring international attention to the issue and that the UN has largely been silent when pressured to respond.

As of September 2022, six thousand Baloch people have been forcibly disappeared by the Pakistan authorities. However, the Pakistani government does not take effective action against this ongoing mass persecution., Instead, military forces are invoked. It should be noted that enforced disappearances, causes great harm to families of those forcibly disappeared, especially women and children. Families of victims are often afraid to defend their rights, or seek help from the government because of the Pakistani authorities’ armed deterrence. There is also evidence showing that the families of those who tried to find the missing persons subsequently became victims of enforced disappearance themselves.

Enforced disappearances are always combined with torture, inhuman treatment and arbitrary killing. Baloch people are experiencing systemic human rights violations led by the Pakistani government authorities, which are predominant in both the military and the country’s economic power. During the protest, Baloch people called on the international community to pay more attention to those who suffer from this crime and to improve their freedom and security more effectively.

According to UN estimates, there were 84,000 internally displaced persons (IDPs) in Balochistan, which includes 26,000 women and 33,000 children (Dedalus, 2007). As of December 2006, the Human Rights Commission of Pakistan believes that 50,000 people from the Dera Bugti district alone had fled their villages by the preceding July(Dedalus, 2007).

The Pakistani government has been denying the presence of IDPs until 2006, after the leak of a UNICEF report on malnutrition and child mortality in Nasirabad and Jaffarabad districts (UNICEF, 2006). The government had to acknowledge the gravity of the situation and grudgingly agreed to relief provision by the UN and local NGOs. Even then, severe restrictions were placed upon the aid organization’s modus operandi. According to the relief workers who visited the area, the military personnel would round up displaced people in trucks and try to hide them ahead of the aid worker’s arrival, which led to more cases of enforced disappearances.

According to the United Nations Development Programme (UNDP), Balochistan has the lowest HDIs in education, health and living Standards(UNPD, 2020). In the past few years, the policy-makers did nothing to improve the system according to the needs of the people in Balochistan. Due to the lack of social amenities and basic facilities, people's right to education has been violated, especially for Baloch children. Without legal protection and government support, people in Balochistan live in poverty and medical resources remain limited.

One of the protesters was Sardar Shaukat Ali Kashmiri, Chairman of the United Kashmir People's National Party (UKPNP), who has been living in Switzerland in exile since 1999 as a result of his campaigning efforts. “We want to exist, we want to be alive, we want our children to be safe”, he stated during the protest. It should be emphasized that people in Balochistan are not only fighting for their lives, freedom and identity, but also fight for their opportunities of development.

Pakistani authorities keep invoking the army along with the police and other military forces to control the situation in Balochistan. The Pakistani army is violently repressing any dissident voices including peaceful dissent in Balochistan, which has always received a military response sent by public authorities(Mendez, 2020). For decades, Pakistan has suppressed and ignored the Baloch people. This is not only infuriating, but also their capabilities to protest(Mendez, 2020). The general approach adopted by the Pakistani state toward any dissent in the region has been that of force, often disproportionate to the threat(Mendez, 2020). Using the military to quell any Baloch uprising into submission has become a norm, and any attempts at protest have been reduced to naught(Mendez, 2020). Because of the military controlled legal system,  the perpetrators breaching Baloch people’s basic human rights are consistently beng given impunity. In many cases of enforced disappearance and forced displacement, the government is the one responsible for the tragedies

The number of cases of Baloch disappearing being attributed to either Pakistan’s security forces or Inter-Services Intelligence agency (ISI) has slowly been on the rise (Manif, 2014). Many political activists, members of the Baloch Students Organization, and journalists have been abducted in broad daylight by pro-Pakistani gunmen and security forces (Manif, 2014).

This all points to the fact that Pakistan respects none of the UN human rights treaties when it comes to the Baloch, Sindhis, Pashtuns and Kashmiris. People’s rights are under serious violations without sufficient access to remedies. Due to the lack of all forms of resources, it will be very difficult for Balochistan to make any significant gains or even win their freedom and security from Pakistan without external assistance. However, unfortunately, the insufficiency of support from the international community for Baloch people has become apparent(Mendez, 2020). This has granted the Pakistani government a free hand in dealing with the region, allowing the military to sustain much of its activities in repression of the Baloch (PTI, 2019). Therefore, Balochistan’s situation needs the attention and assistance of the international community. This was once again mentioned by the protesters today, who will remain raising their voice until people in Balochistan see a better life.

Mendez, Z. (2020). Repression and Revolt in Balochistan: The Uncertainty and Survival of a People’s National Aspirations.

UNICEF. (2006). The State of the World’s Children 2006, Reaching the excluded and the invisible children of the world.

How Impunity Paves the Way to Widespread Violence in South Sudan

Monk Subjected to Detention and Torture Due to His Connection...