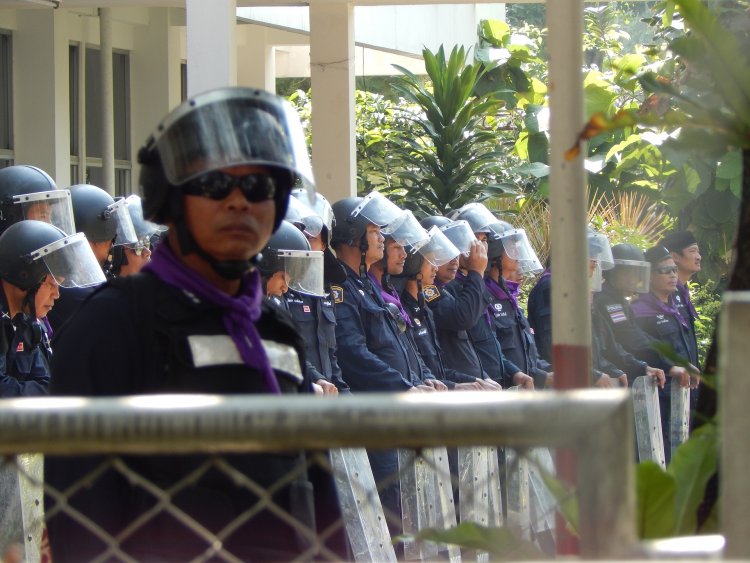 Unarmed anti-government protesters have repeatedly been met with violence by Bangkok Riot Police since the beginning of the APEC Summit, held from November 16-19 in the country’s capital. On the morning of Friday the 18th, rubber bullets and tear gas was fired against protesters from the ‘People Stop Apec 2022’ group, who were marching to the APEC Summit venue. As riot police was ordered to stop demonstrations nearing the venue, clashes broke out around noon near the Democracy Monument until tear gas was utilised and the protestors dispersed. During these clashes, two protestors and one Reuters photographer were wounded. At least 10 people were arrested on the charge of ‘not following rules at a protest set by police’.

Videos from the protest emerged on Twitter showing Riot police brutally pushing a monk into a wall even though he showed his hands to present he was unarmed. Youth activist Patsaravalee 'Mind' Tanakitvibulpon stated: “The police have overreacted. They are using rubber bullets on us and tried to stop us many times (Reuters).”

Already on Thursday two protestors had been slightly injured at the Democracy Monument when trying to hang a protest banner from the monument due to police intervention. A spokesman for the Royal Thai Police, Pol Maj-Gen Archayon Kraithong, warned that the police will utilise crowd-control equipment if protestors attempted to enter areas around the Queen Sirikit National Convention Centre where APEC meetings are taking place as well as all areas close to the hotels of APEC delegates until November 19th.

The banners of the protestors demand Prime Minister Prayut Chan-o-cha to step down as an illegitimate leader and to end the APEC Summit 2022 as well as to free all political prisoners. The protests are expected to continue today, as it is hoped that the police will not dare use excessive violence or water cannons in vicinity to the summit’s international high rank delegates.

Leah (2022, November 18). Riot police use tear gas and fire rubber bullets at protesters in Bangkok, Thailand. The Thaiger. Accessed via https://thethaiger.com/hot-news/protests/riot-police-use-tear-gas-and-fire-rubber-bullets-at-protesters-in-bangkok-thailand on 19.11.2022.

Tibetan Man Arrested for Possessing Photos of the Dalai...