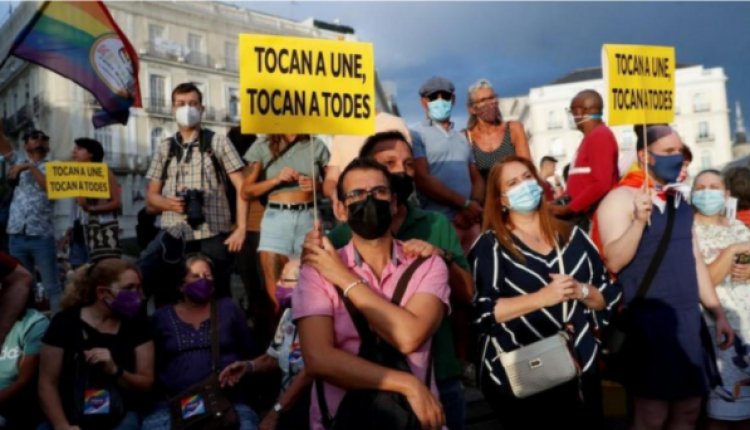 Protesters holding banners “touch one of us, touch us all” against rise in homophobic attacks in Madrid   -   Copyright Thomson Reuters 2021

Last July in Galicia, nursing assistant Samuel Luiz was allegedly murdered because of his sexual orientation. Since then, Spanish protesters have taken the streets to denounce the rise in hate crimes against the LGBTQ+ community (Reuters, 2021a). According to a statistical report of the Spanish interior ministry, hate crimes have been on the rise, with a 9% increase every year since 2014, including hate crimes against LGBTQ+ individuals (Reuters, 2021a). Recently a new targeted attack sparked protests. On Wednesday 8th of September, Spaniards took the streets to express discontent against the lack of protection of LGBT+ following the aggression committed against a young man committed three days before, also because of his sexual orientation (Yagüe & Wilson, 2021). However, the Ministry of Interior quickly refuted the claim by explaining the young man amended his original statement by adding the wounds had been inflicted consensually (Yagüe & Wilson, 2021). The man could be facing legal charges for making a false statement (Jones, 2021).

Following this statement, the protest organizers came forward and explained that a false report should not discredit the reports on rising trends in hate crimes (Jones, 2021). Irene Montero, the Spanish Equality Minister, insisted that "Hate crimes against the LGBTI collective rose 43% during the first half of 2021. Let's not lose sight of the forest because of one tree." (Montero in Jones, 2021). Additionally, LGBT groups emphasize that the statistics do not include all the hate crimes committed since these crimes are still wildly underreported (Euronews, 2021).

Historically, Spain has adopted a progressive approach towards LGBQ+ rights. They are the fourth country to legalize same-sex marriage, following the Netherlands, Belgium, and Canada (Guardian, 2005). However, recent reports published indicate that LGBT+ individuals are still facing hate crimes.

In response to the last attack's protest, the Socialist Prime Minister, Pedro Sanchez, held an emergency meeting on Friday 10th of September, with the ministers and community leaders (Reuters, 2021b). Following this meeting, the government decided to create a special unit within the Interior ministry. The team will focus on preventing hate crimes and support victims (Reuters, 2021b). Furthermore, the National Anti-Hate Crime Unit will increase hiring and publish a three-year plan soon (Reuters, 2021b).

The National Anti-Hate Crime Unit will not focus exclusively on LGBT+ attacks but also on other minorities, such as the gitano population, who face increasing discrimination and violent attacks (Reuters, 2021c).

Interior Minister Fernando Grande-Marlaska accused the normalization of hate speech on social media platforms of fueling intolerance and encourage hate crimes (Reuters, 2021b). LGBT+ rights activist, Boti Rodrigo, claimed that the increase in hate speech beyond social media platforms and within political institutions and political parties also encouraged targeted crimes against the LGBT+ community (EURACTIV, 2021). On the other side of the political spectrum, far-right party VOX accused the government of not respecting the legal concept of presumption of innocence. Others also called for the interior minister's resignation following the false attack claim (Reuters, 2021b).

Both official statistical reports and growing protests reflect that the LGBT+ community in Spain lacks efficient protection against LGBT+ based violence.

Reuters (10th September 2021a), “Spain sets out plan to tackle rising hate crimes” retrieved on the 15th of September 2021 from
https://www.reuters.com/world/europe/spain-sets-out-plan-tackle-rising-hate-crimes-2021-09-10/

Reuters (12th September 2021c), “Hundreds protest against rise in homophobic attacks in Madrid” retrieved on the 15th of September 2021 from https://www.reuters.com/world/europe/hundreds-protest-against-rise-homophobic-attacks-madrid-2021-09-11/.

As the new school year commences, Côte d'Ivoire shows its commitment to promoting...

Vietnamese Workers in Serbia Went on Strike to Protest...

First graduates of the Institute of academic techniques...