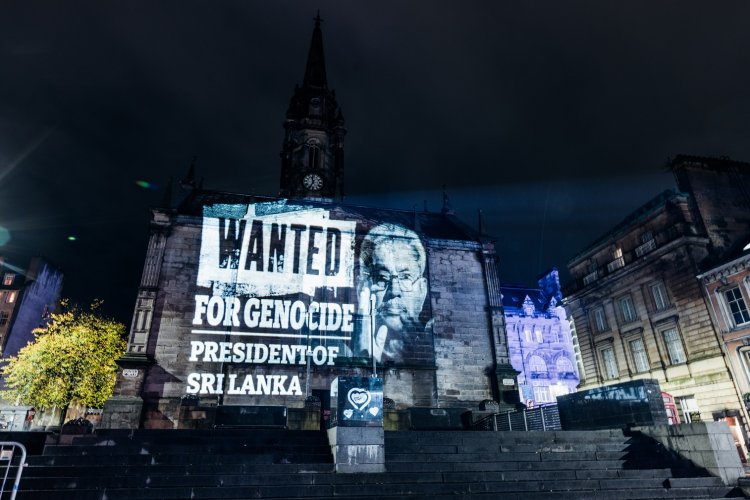 ‘Wanted for Genocide - President of Sri Lanka’: A projection by Tamil activists on buildings across Scotland. Photo: Tamil Guardian, 2021.

The 26th United Nations Climate Change Conference, COP26, started yesterday, on the 31st of October 2021 in Glasgow, Scotland. Sri Lanka’s President Gotabaya Rajapaksa arrived in Glasgow on the 30th of October, in order to attend the COP26 (Colombo Page, 2021). Ahead of the President's arrival, Tamil activists across Scotland, the United Kingdom generally, and other European States, such as France and Belgium, have been protesting online and in the streets against President Rajapaksa (Tamil Guardian, 2021a). The protesters are calling for international accountability of Sri Lanka’s current President for numerous alleged war crimes and genocide committed against the Tamil minority when he was holding the office of Defence Secretary (Tail Guardian, 2021b). Earlier last week, a ‘landmark’ submission was filed with the International Criminal Court (ICC) to investigate alleged violations of international law, genocide and war crimes in Sri Lanka, naming President Rajapaksa as one of the perpetrators (Tamil Guardian, 2021b). Across Scotland, Tamil protesters had put up light projections onto buildings, including the Scottish Parliament Building, calling for international accountability of President Rajapaksa’s alleged participation in the Tamil genocide (Tamil Guardian, 2021b).

The African Commission on Human and People’s rights announces...

Biden Meets XI Jinping and Speaks up About Human Rights...