Xenophobia in Chile: The Images of the March Against Migrants That Ended in Violence 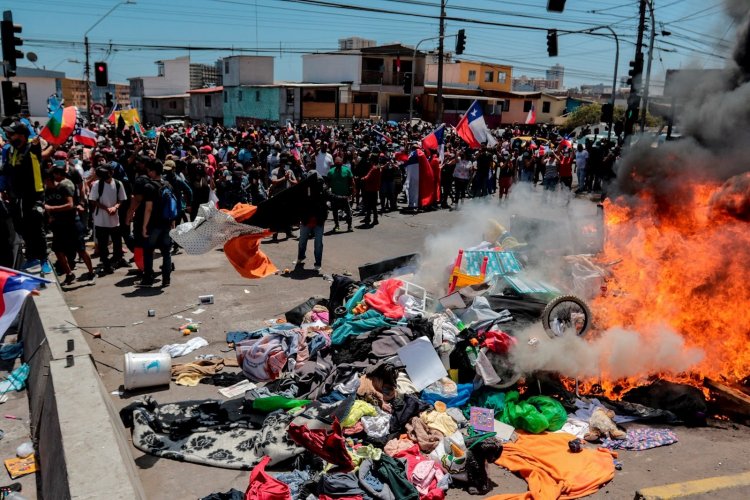 A march against irregular migration held Saturday, September 25 in Iquique, northern Chile, ended with violent incidents against foreigners who are stranded in the city waiting to regularize their situation. With Chilean flags and posters that read "No more illegal", the 5,000 attendees (according to police sources) expressed their rejection of the migratory wave that has the northern part of the country in full crisis, due to the collapse of some public spaces.

“We want the government once and for all to come closer to the commune, to talk with our communities. Set clear policies and actions to deliver security. Also to respect our rights as Aymara ”, said the mayor of Colchane, Javier García.

The march, which moved through the city center, ended with the burning of tents that were used by migrants to spend the night in squares and beaches. An act that has been denounced as a xenophobic attack. Interior Minister Rodrigo Delgado responded to the criticism. He said that the government will continue to strengthen the border plan with more personnel and more technical means "to be able to stop the passage of people who want to enter Chile clandestinely." Likewise, he reiterated that he is going to resume massive deportation of migrants. A policy that is currently paralyzed by the Justice system and that has been widely criticized by international and human rights organizations.

There are about 3,000 migrants who are stranded in Iquique. Most of them after entering Chile through non-authorized border crossings and crossing the route to the coast. On Friday, September 23, a large operation by the Chilean Police Force evicted a camp of around a hundred migrants who were sleeping in Plaza Brasil, in the center of Iquique; a place where they settled months ago as a result of the migration crisis.

[1] A commune[a] is an intentional community of people sharing living spaces, interests, values, beliefs, and often property, possessions, and resources in common.

[2] Aymara is a large South American Indian group living on the Altiplano — a vast windy plateau of the central Andes in Peru and Bolivia — with smaller numbers in Argentina and Chile.