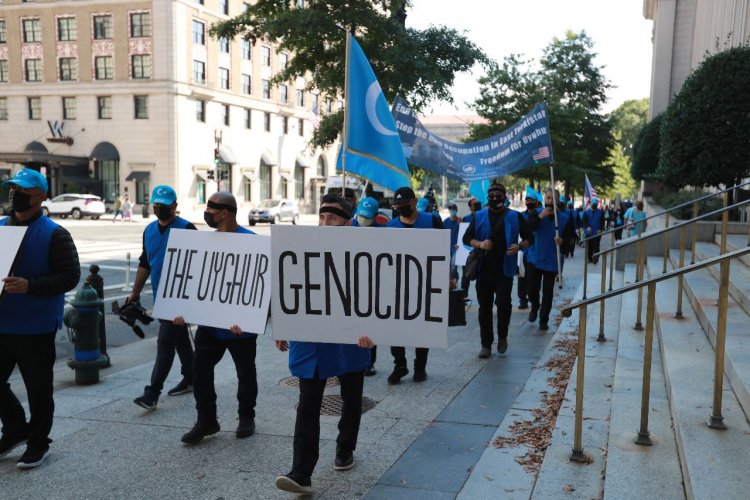 It has now been confirmed that the victims who died in the apartment fire on November 24 were all Uyghurs (Hoshur, 2022). The deaths of the victims started nationwide anti-COVID restrictions protests against the Chinese Communist Party, demanding that President Xi Jinping and other party leaders step down (Hoshur, 2022). Uyghurs have been suffering under the Chinese leadership for years now, as their basic human rights have been violated. Such violations include (and are not limited to) arbitrary arrests, torture, ill-treatment, and sexual and gender-based violence, forced abortion and sterilization, enforced disappearances, forced labour, restrictions on religious and cultural practices, as well as forced inter-ethnic marriages (Jürgenssen, 2022).

China’s zero-COVID policy has had an adverse impact on almost everyone in China but has further worsened the situation for Uyghurs, for instance by denying Uyghur families to conduct religious burials (Jürgenssen, 2022). An interview conducted by Radio Free Asia with two Uyghur siblings who lost numerous family members in the fire demonstrates the ongoing suffering of Uyghurs particularly well. The siblings had already lost both their father and brother when they were arrested by Chinese authorities and sent to internment camps. They have not had any contact with either of them for several years now and still have no knowledge of whether they were alive or dead (Abdurashid, 2022). Now the fire robbed them of their mother and four siblings as well. Even though the building was located close to the fire department and a hospital, it took three hours for the fire to be extinguished. The family was not allowed to leave their apartment in the meantime (Abdurashid, 2022).

The violation of Uyghur rights by the Chinese government has become increasingly e recognized in recent months. In August this year, the UN Office of the High Commissioner of Human Rights issued a report in which it concluded that the arbitrary and discriminatory detention of Uyghurs and other Muslim minorities may constitute crimes against humanity (Jürgenssen, 2022). In October this year, fifty states at the UN General Assembly issued a joint statement denouncing China for its human rights violations of Uyghur and other Muslim minorities in Xinjiang (Jürgenssen, 2022). This week the US Congress is debating the adoption of the Uyghur Policy Act of 2021, which would introduce new tools for the US to hold China accountable for its violations of Uyghur rights (RFA Uyghur, 2022). The world is finally paying attention to the extreme abuse of Uyghur rights, which violate numerous international human rights documents - such as the Universal Declaration of Human Rights [1], the International Covenant on Economic, Social and Cultural Rights [2], the International Convention on the Elimination of All Forms of Racial Discrimination [3], and the Convention against Torture and Other Cruel, Inhuman or Degrading Treatment or Punishment [4] – as well as China’s own Constitution [5] (O’Connell, 2020).

[1] The Universal Declaration of Human Rights is a universal but non-legally binding instrument and not a binding treaty. Many would, however, argue that it should be treated as international customary law.

[5] Article 4 of the Constitution of the People’s Republic of China guarantees the protection and equality of ethnic groups in China and prohibits discrimination against them.

O’Connell, G. (2020, August 19). How China is Vioalting Human Rights Treaties and its own Constitution in Xinjiang. Just Security. Retrieved on November 15, 2022, from https://www.justsecurity.org/72074/how-china-is-violating-human-rights-treaties-and-its-own-constitution-in-xinjiang/.

Belgium Files Declaration of Intervention at ICJ in Allegations of Genocide Case...

Protests over Killing of a Tamil Activist in Jaffna, Sri...

Tamil Families Continue to Protest the Disappearance of...

Tibetan Monk Writer Held Incommunicado For More Than A...