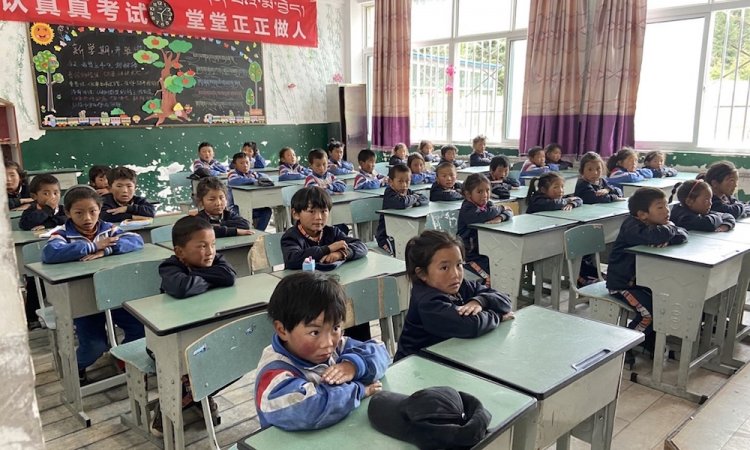 Tibetan students at a school in Chamdo in 2020. Photo: Global Times.

In late December 2021, Chinese authorities in Matoe County arrested Loten, a college graduate, for openly criticizing on an online messaging platform, WeChat, the use of Chinese as the exclusive teaching language in Tibetan schools. According to sources, Lotte was apprehended for arguing against the replacement of Tibetan-language textbooks in local schools. Since his arrest, the student has remained in custody in Xiling City.

Apart from the fact that he is held at a detention centre in the area of Xiling City, the provincial capital of Qinghai, it is reported that Lotte’s exact location remains unknown. Further, sources allege that his family became aware of his arrest via a phone call, while they have not been able to contact or visit him. Moreover, they were informed that he was to undergo political re-education training.

Since September 2021, a plan to phase out the Tibetan language as a teaching medium in Tibetan schools in Qinghai has taken effect. Instead, the newly implemented guidelines favour the use of Chinese for teaching classes.

According to commentators, the sinicization of the Tibetan educational system has been the reason for protests among locals in the adjacent province of Sichuan. Specifically, private schools in the region have closed due to parents concerns about the absence of their native language and culture from their children’s education. Additionally, sources indicate that in August, two Tibetan students were arrested by Qinghai authorities in Golog’s Darlag county for opposing the wider policy of utilizing the Chinese language as the sole educational medium in Tibetan schools.

In recent years, Tibetans have focused on their language rights in an effort to construe their national identity. As sources report, they do so by organizing informal language courses in monasteries and towns deemed by authorities as illegal associations, with teachers constantly facing the risk of arrest.

Protests over Killing of a Tamil Activist in Jaffna, Sri...