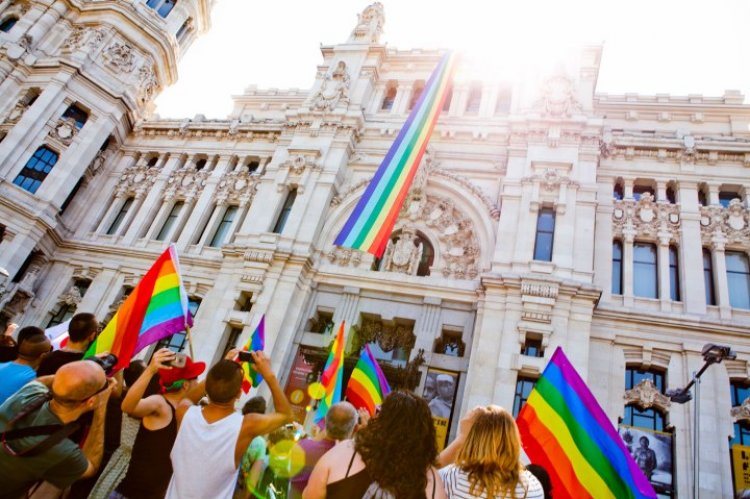 On Thursday the 16th of December, thousands of people gathered in Madrid to protest against the Government’s plans to abolish a regional bill that ensures the rights of LGBTQ+ people. The bill under attack includes provisions that guarantees equal treatment and non-discrimination for LGBTQ+ people in areas of administration, employment, health, education, culture, leisure, sport, family, children and young people, initiatives in the areas of advertising, the media and the internet, and measures in the field of external action and international protection. The bill also recognises the right to self-determination of gender identity and prohibits conversion therapy.

The new proposal was tabled by Spain’s far-right VOX party, a notoriously anti-LGBTQ+ and anti-immigration party. VOX is the first far-right party with a significant number of lawmakers since the death of dictator Francisco Franco in 1975. [1]

The bill comes after protests earlier this year in which people filled the streets of Madrid to show solidarity with the LGBTQ+ community and to call for better protection for LGBTQ+ rights after a series of homophobic attacks. Hate crimes against LGBTQ+ people, according to statistics, have been growing by around 9% a year since 2014. [2]

The proposal is the latest in a worrying trend of anti-LGBTQ+ moves in Spain, a country which had been seen as one of the pioneers for LGBTQ+ rights, becoming just the third country in the world to legalise same-sex marriage in 2005. The move from VOX has attracted backlash from various activist organizations, with the Federation of Trans Collectives of the Spanish State calling for the urgent approval of an LGBTQ+ rights law. Fran Rebollero, the spokesperson of an LGBTQ+ federation, who suffered a homophobic assault in Madrid said he felt abandoned by regional police. Data from the Interior Ministry, shows over 250 hate crimes related to sexual orientation or gender identity were reported in Spain in 2019, and the number has since grown in 2021.

The regional government of Isabel Diaz Ayuso has said that the People's Party will abstain from voting on the bill at Madrid's regional parliament.