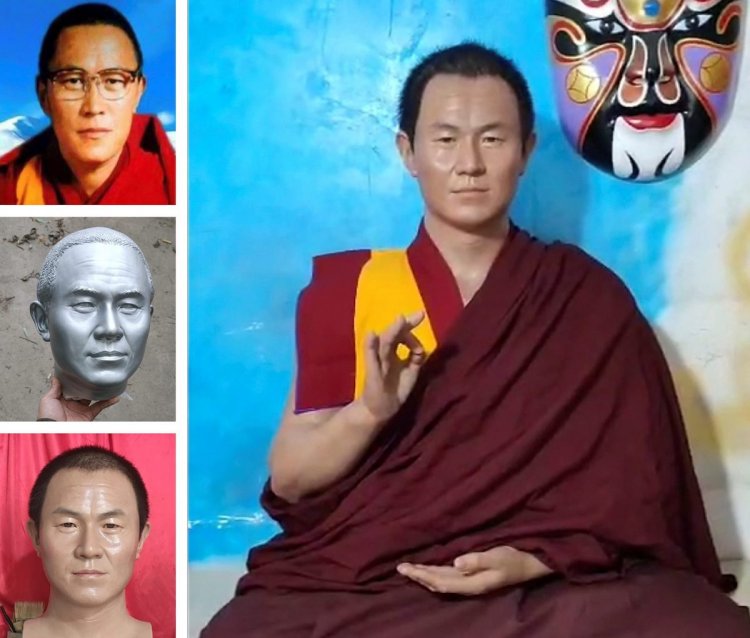 Tulku Tenzin Delek Rinpoche, who died in 2015 in a Chinese prison under mysterious circumstances, is shown top left. Remaining images show the statue commissioned by the late monk's students and built by artists in Shenzhen, China. Photo: RFA.

Another attempt to circumscribe Tinetans’ cultural and religious rights just saw the light of day. According to sources, in June 2021, Chinese authorities seized a life-size statue of Tulku Tenzin Delek Rinpoche, a local religious leader in a Tibetan area annexed to Sichuan Province.  As reports indicate, Tulku Tenzin Delek Rinpoche perished in prison in July 2015 under uncertain conditions. The authorities located the statue in Kardze Tibetan Autonomous Prefecture halting its transit to Lithang in Karze Prefecture, the late monk’s home county. The confiscation operation led to several arrests of Tibetans, as well as Chinese citizens for undertaking the task of manufacturing and transporting the statue.

Based on the reports, the first arrests concerned the possession of the statue with the detainees spending a month in custody incommunicado undergoing severe corporal punishment. Further sources indicate that the relatives of certain detainees were also apprehended and beaten in custody.

Additionally, the person who arranged the manufacture, as well as those who participated in the statue’s transportation, were arrested. Moreover, there are accounts of a  raid on the house of Dolkar Lhamo, Rinpoche’s younger sister, in September to take down the family shrine. Other sources relay that Dolkar and other relatives were arrested for approximately 18 days while being interrogated and tortured.

The statue was ordered by certain students of the late monk and constructed by artists in Shenzhen, China, according to one of Rinpoche’s students residing in Europe. Tulku Tenzin Delek Rinpoche died in 2015 under unknown circumstances while serving his 22-year sentence in a Sichuan prison for his alleged participation in a series of unsolved cases concerning bomb attacks. Yet, Tibetans claim that he was targeted for his role as an active religious leader and Tibetan rights advocate.

Tamil Families Mark 5 Years of Continuous Protest for their...