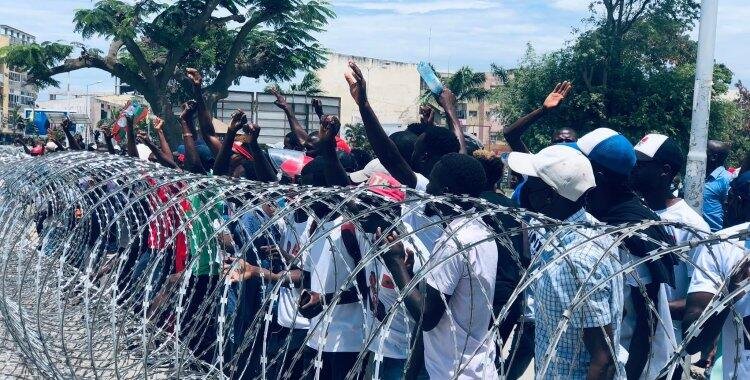 On December 11, Saturday, a march was scheduled in Benguela to salute the XIII Ordinary Congress of UNITA, Angola’s major opposition party – and the only opposition still allowed by MPLA, the ruling party. The police had previously informed that the march could be held since it violated a Presidential Decree regarding mass gatherings due to COVID-19, but the Provincial Secretariat of UNITA did not back down. Worth noting that this Decree has not been applied when mass acts are organized by MPLA.

On Saturday morning the forces were already on standby in the main streets of Benguela and where the demonstrators were expected to gather to start the march, starting arrests at 10:00. They set up security barriers, including two serpentines of barbed steel wire and, according to the police, UNITA militants forced and broke the first barrier and started to hurl blunt objects like stones and water bottles filled with sand. As a response, officers admitted having launched “non-lethal artefacts, only of moral effect”, however, Eugénio Pessela was hit on the chest by a tear gas grenade and died even after being assisted.

Witnesses reported that Pessela was participating peacefully. The police informed to mourn deeply what happened and have requested an autopsy on the corpse, “so that the real cause of death can be known”. Furthermore, activists say at least 100 civilians were arrested and there are many others missing; some were picked up and left in areas far from the city center, making it difficult for them to return and risking their safety – the authorities deny any arrests.

Protests Erupt in Serbia in Response to Rio Tinto Lithium Mine

Arbitrary Detention and Arrest of Opposition Leaders and...