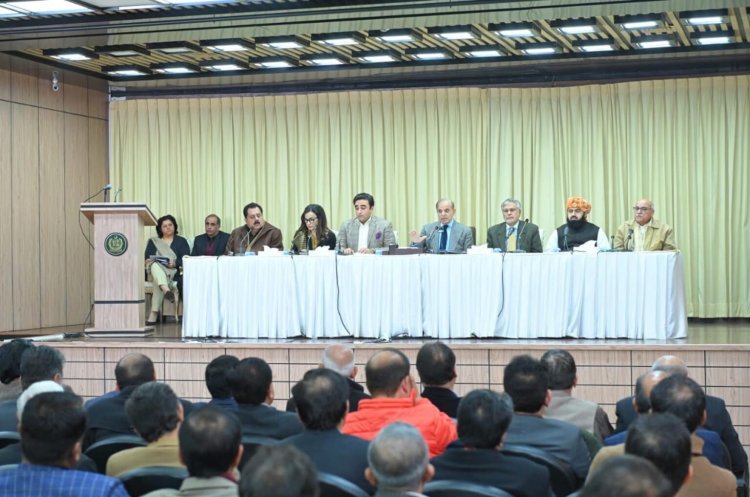 Photo by Staff report from PakistanToday.com.

Prime Minister Shehbaz Sharif on Wednesday called the $9.7 billion pledges by the international community at the Geneva conference a vote of confidence on the Pakistani nation, assuring the funds would be spent transparently and audited through a third party.

According to the prime minister during a news conference after he returned from Geneva where he co-hosted the International Conference on Climate Resilient Pakistan with United Nations Secretary-General Antonio Guterres, this is the manifestation of trust and dignity to the government and people of Pakistan by the world nations.  Giving a breakup of the pledged money, the prime minister said the Islamic Development Bank made the biggest pledge of $4.2 billion followed by $2 billion by the World Bank, $1 billion each by Saudi Arabia and the Asian Infrastructure Investment Bank (AIIB), $500 million by Asian Development Bank, $100 million each by China and the United States, €380 million by France, €84 million by Germany and $25 million by Qatar, besides others.

The prime minister said following the pledges by the international community, it was the government’s responsibility to ensure the successful and transparent execution of the projects to meet the needs of flood survivors and the world’s expectations. In addition, he also stated that despite the worst division created by the opposition in the society, the representatives of federal and provincial governments attended the conference and presented their case to the international community, which was also a display of the nation’s trust in the coalition government.

He specially thanked the UN Secretary-General for supporting Pakistan in its endeavours of building back after it was hit by the worst floods in history. He stated that as the incumbent government was a combination of youth and experience, it was a must to put in all of the efforts to accomplish the objectives of reconstruction and rehabilitation. The prime minister also thanked the Saudi leadership for hinting at enhancing safe deposit to $5 billion and investment to $10 billion.

Regarding Sharif's upcoming visit to the United Arab Emirates, the prime minister said Pakistan desired to enhance its trade and investment relationship with the friendly country. He emphasized that this was an opportunity to strengthen the economic ties between the two nations and attract investment in various sectors such as energy, infrastructure, and tourism. Responding to a question about the security situation in Khyber Pakhtunkhwa, the prime minister mentioned that the province had seen a significant improvement in security in recent years and the government was committed to maintaining this progress. He also emphasized the need for collective efforts to combat terrorism and extremism in the region.

The prime minister has affirmed that the international aid pledged to Pakistan will be used transparently and audited by a third party. He also highlighted the government’s efforts to ensure the successful and transparent execution of projects to meet the needs of flood survivors.

The Time to Act is Now: COP27 Marks a New Era for Climate...

Climate Finance Pledge Will Not Be Met Before 2023