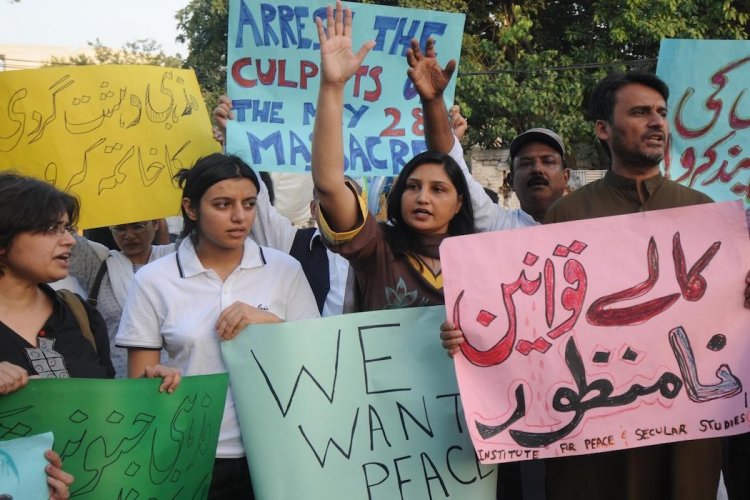 The legal notice was addressed to the Ahmadiyya Muslim Community USA’s spokesmen Amjad Mahmood Khan and Harriz Zafar. The PTA warned that the failure to shut down the website would lead to the criminal prosecution of its administrators on the grounds of blasphemy.[2]

Under section 295-A of the Pakistan Penal Code, blasphemy is a criminal offence punishable with imprisonment up to ten years including a fine. Moreover, violation of section 295-B of the same code—namely any defiling, damaging or desecration of the Holy Qur’an for any unlawful purposes—may lead to imprisonment for life. In light of this event, the administrators of trueislam.com could potentially face a 500 million PKR (US$3.1 million) fine and have to serve jail terms if they failed to shut down the website.[3] According to the Pakistan Constitution, Ahmadis are explicitly considered as non-Muslims under the Article 260(3). This in result would trigger the Pakistan Penal Code.

This is not the only censorship that the Ahmadiyya community is undergoing. On December 25 of 2020, the PTA issued a notice to Google and Wikipedia to remove content associated with the Ahmadiyya community[4]. The PTA explicitly demanded the removal of articles in Wikipedia representing the head of the Ahmadiyya Muslim Community as a Muslim and required Google to change their algorithm for Islamic search queries.[5] In addition, in January 22 2021[6] at a press release event of PTA, the website trueislam.com was blocked for viewership in Pakistan.

All these events call for attention to the increasing human rights violation against  the Ahmadiyya community in Pakistan.

History of the Ahmadiyya community in Pakistan

The Ahmadiyya movement was formally founded by Mirza Ghulam Ahmad in 1889.[7] The Ahmadiyyas have always considered themselves as Muslims, as their faith emerged from the Sunni tradition of Islam and they believe in all the five pillars of Islam.[8] However, their beliefs differ from the traditional Islamic faith that the Prophet Mohammad was the last of the Prophets and that no others will follow.[9]

Despite their relevant position in the establishment of the country, the Ahmadiyya community has been suffering rampant discrimination over the past few decades. During the 1950s, riots were held in Pakistan demanding Ahmadis to be declared as non-Muslims and the eradication of Zafarullah Khan from its position of Foreign Minister.[15]

It was in 1974 when the Second Amendment to

the Constitution of Pakistan was passed, whereby

the Ahmadis were explicitly declared to be non-Muslims,

giving the State the arbitrary powers to determine who

Ten years later, in 1984, Pakistan enacted the Anti-Islamic Activities of the Quadiani Group, Lahori Group and Ahmadis Ordinance (Ordinance XX) as an addition to the Pakistan Penal Code (sections 298-B and 298-C), prohibiting Ahmadis from publicly practising their faith. The Pakistani Supreme Court upheld its constitutional validity in, among other judgements, Zaheerudin v State. In it, the Court defended that an Islamic state such as Pakistan has the rights to defend religious terms’ sanctity and prohibit other religious groups from using them.[17]

Current situation of the Ahmadiyya community in Pakistan

Today, Ahmadis continue to be targeted by mass online hatred and social segregation. Moreover, threats, violent attacks on members of the Ahmadiyya community and destruction of their places of worship as a consequence of the explicit discrimination set forth in the abovementioned provisions.[18] Indeed, blasphemy accusations have been the main cause for extrajudicial killings and mob lynching, targets of which are frequently members of the Ahmadiyya community individuals.[19]

However, noteworthy are the efforts of the Ahmadis to stand up for their beliefs. For instance, members of the Ahmadiyya community have not participated in an election for more than 30 years, as doing so would require them to explicitly declare themselves as non-Muslims.[20]

The Ahmadis also face discrimination in the fully enjoyment of their civil rights. For example, all Pakistani Muslim citizens applying for a passport must sign a statement openly declaring that they consider the founder of the Ahmadi community an imposter, and that they believe that Ahmadis are  not Muslims.[21]  In other words, when applying for a passport, the Ahmadis must either declare Islam as their religion, which entails signing the statement abovementioned, or declare themselves as non-Muslims.

International commitments of Pakistan on freedom of religion and belief

The Islamic Republic of Pakistan has signed and ratified many international treaties and conventions in regard to religious and cultural rights, such as the Universal Declaration of Human Rights (UDHR), the International Covenant on Civil and Political Rights (ICCPR) and the International Covenant on Economic, Social and Cultural Rights (ICESCR). For instance, the freedom of every person to manifest their religion either alone or in public is enshrined under Article 18 of the UDHR. By the same token, Article 18(2) of the ICCPR states that “no one should be subject to coercion which would impair his freedom to have or to adopt a religion or belief of his choice”.

Concern about the  blasphemy laws -namely the abovementioned section 295 of the Pakistani Penal Code- have been raised by the international community .[22] According to the International Commission of Jurists[23], these laws were denounced by several UN Member States during Pakistan’s second Universal Periodic Review[24] in 2012 at the UN Human Rights Council. Seven recommendations were addressed to Pakistan in regards to their blasphemy laws by the Council. They stressed that its Penal Code has violated Pakistan’s obligations under international human rights law. In particular, several Member States alleged a violation of Pakistan’s international commitments to respect  the freedom of religion and belief and the prohibition of discrimination. [25]The Council urged Pakistan to immediately repeal the laws or amend them.[26]

[12] Ahmadiyyas were at the Forefront of creation of Pakistan, an Ahmadiyya Unit fought against India in Kashmir in 1947-48 (2019, December 9). OpIndia. Retrieved March 15, 2021, from https://www.opindia.com/2019/12/how-ahmadiyyas-were-at-the-forefront-of-creation-of-pakistan-islam-all-you-need-to-know/

[16] Forum for Religious Freedom-Europe (2016, September 13). On September 7, 1974, the Second Amendment to the Constitution of Pakistan was passed, declaring Ahmadis to be non-Muslims. https://foref-europe.org/blog/2016/09/13/on-september-7-1974-the-second-amendment-to-the-constitution-of-pakistan-was-passed-declaring-ahmadis-to-be-non-muslims/ (accessed 15 March 2021)

[24]“ The Universal Periodic Review is a process that involves a review of the human rights records of all UN Member States. It provides the opportunity for every country to declare what actions they have taken to improve the human rights situations in the countries and to fulfil their human rights obligations”. United Nations Human Rights Council (n.d.). Universal Periodic Review. Office of the High Commissioner for UN Human Rights. https://www.ohchr.org/EN/HRBodies/UPR/Pages/UPRMain.aspx

Financial Action Taken Force (FATF) Will Fail in Its Duty...