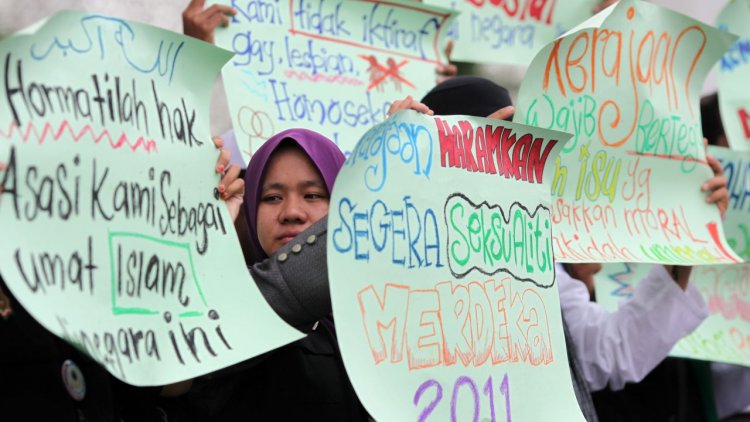 In early December, in the northeastern State of Terengganu, the State Assembly passed new laws punishing Muslim women for out-of-wedlock pregnancies and for wearing men's clothes.

A fine of up to 5,000 ringgit ($1,134), a prison term of three years and six lashes, or a combination of the three, is provided as punishment for committing the offenses. [1]

State news agency Bernama said these laws will better protect 'the welfare of Muslims', and added that the ban on women behaving like men was enacted because the existing laws only covered men behaving like women, not the other way around, because in the past this problem was not widely felt.

However, Saiful Bahri Mamat, a religious official of the State, said that widespread cases of 'pengkid' (tomboy or lesbian) have a 'harmful impact on society and have therefore now forced the government to put an end to this problem. [2]

14 human rights groups, including the All Women's Action Society, and several activists said that the legislative changes violate the right to freedom of expression, equality and non-discrimination and are a clear indication of the gender discrimination that is being implemented in some parts of the country, making the serious situation of equality and the LGBTQIA+ community even worse. [2]

Terengganu is governed by the Islamic fundamentalist Parti Islam Se-Malaysia (PAS), which won the elections last month and gained the most seats in the general election. According to several reports, their goal is to implement stricter laws in the state according to Islamic rules. [3]

These legislative changes mirror Indonesia's recent move to ban extramarital sex and raise the penalty for abortions, while also adding limits to the ability to criticise the president and public institutions and restricting the rights of LGBTQIA+ citizens. [3]

[3] Bhawana Bisht “Why Is The New Malaysian State Law Punishing Women?” She the People (December 17, 2022). Retrieved on December 19, 2022 from: https://www.shethepeople.tv/news/malaysia-law-to-punish-women-for-dressing-like-men/

Muslim Women in India Again Listed on ‘For Sale as Maids’...

The Court in Pakistan awards life imprisonment for kidnapping...