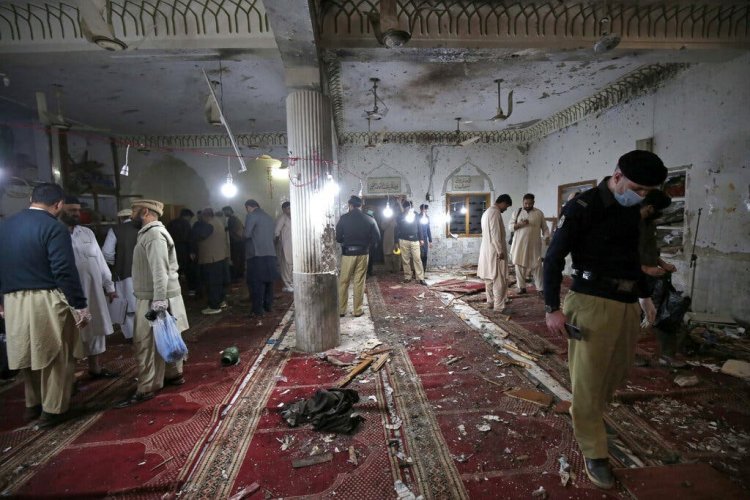 Photo by Bilawal Arbab/EPA via Shutterstock

Today, a suicide bombing attack occurred in a Shiite Mosque in Pakistan’s north-western city, Peshawar (Deutsche Welle, 2022). It has been reported that there were at least 150 worshippers in the mosque during the explosion and that 56 people have died and more than 100 of them are injured so far (Khan & Masood, 2022). It is expected that the death toll will increase further since the conditions of many of the wounded are critical (Khan & Masood, 2022).

According to the local police, the attack started with the gunfight in which two armed men shot two policemen outside the mosque, resulting in the deaths of one of the policemen and one of the attackers (Al Jazeera, 2022). The other armed man entered the mosque and set off the bomb (Al Jazeera, 2022). The Prime Minister of Pakistan, Imran Khan has denounced the attack and has ordered further investigation (Deutsche Welle, 2022).

At first, no group was immediately identified responsible for committing the attack today (Al Jazeera, 2022). Yet, it is important to note that minority Shiite Muslims have experienced several violent attacks in Sunni-majority Pakistan and have mainly been targeted by Sunni Muslim Islamist militant groups like the Pakistani Taliban or Tehreek-e-Taliban Pakistan that have been among the suspects today (Saifi, 2022). In general, the Pakistani Taliban has reportedly organised several attacks in the region, which is close to the border with Afghanistan, before and is claimed to have become more emboldened following the return of the Afghan Taliban in Afghanistan last year (The Times of India, 2022).

However, later during the day, an affiliate of the Islamic State of Iraq and Syria (ISIS), the Islamic State Khorasan (ISK) claimed the responsibility (Khan & Masood, 2022). This is not the first time that the group persecuted the Shiites in the region (New Delhi Television, 2022).

The Times of India. (2022, March 4). Suicide bombing kills 56 at Shiite mosque in Pakistan. The Times of India. Retrieved March 4, 2022, from https://timesofindia.indiatimes.com/world/pakistan/45-killed-over-65-injured-in-mosque-blast-during-friday-congregation-in-northwest-pakistan/articleshow/89990575.cms

Giving Birth in The Middle Of A War