Mistreatment of Africans trying to escape conflict at Ukrainian Border 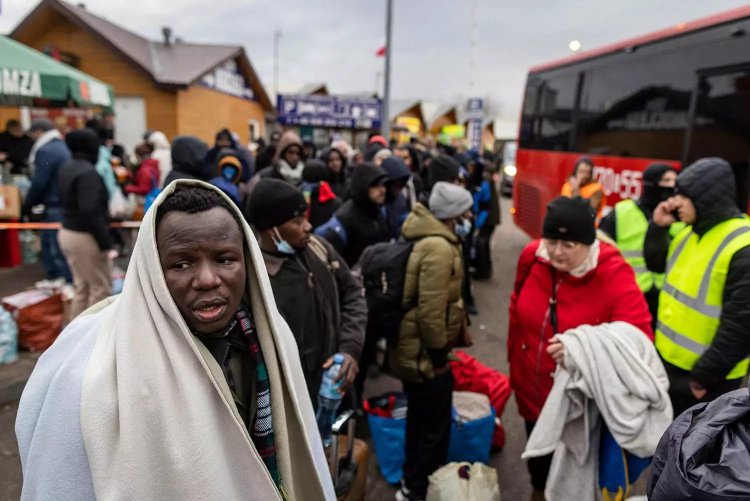 There have been numerous reports that African’s have been discriminated against at the borders in an attempt to leave the Ukraine after Russia invaded the country. Reportedly, Africans (mostly students) have been barred or pushed from trains and buses evacuating people from the Ukraine to Poland and other neighbouring countries. It also appears that hotels close to the Ukrainian borders have not been allowing black people, as well as other-non-whites, to enter, with many of them being forced to sleep on the street.

Thousands of African students live in the Ukraine and are now trapped in an ongoing conflict. The borders appear to have adopted a Ukrainian’s first policy, leaving many foreigners stranded in freezing conditions waiting to cross the border to safety. The African’s embassies have just urged their citizens to stay safe but have failed provide any evacuation plans as of yet. Nigeria has strongly condemned the discrimination of Africans and the President has emphasized that "All who flee a conflict situation have the same right to safe passage under the UN Convention, and the colour of their passport or their skin should make no difference” (Presidency Nigeria Tweet, 27 February 2022).

This discrimination is unfortunately just a part of a larger racist narrative that has surrounded the Ukrainian conflict with statements such as “European people with blue eyes and blond hair being killed, children being killed every day” (David Sakvarelidze, former deputy prosecutor general of Ukraine), “This is not a developing third-world nation. This is Europe” (ITV News correspondent Lucy Watson). These statements  and the treatment of African’s and other non-Caucasians, give the impression that the lives of Europeans are worth more.

Ellison, S and Andrews TM (February 27, 2022) “‘They seem so like us’: In depicting Ukraine’s plight, some in media use offensive comparisons.” Washington Post. https://www.washingtonpost.com/media/2022/02/27/media-ukraine-offensive-comparisons/

Shoaib, A  (February 26, 2022). “Thousands of African students who went to Ukraine to train to become doctors and engineers scramble to escape the Russian offensive.” Insider. https://www.businessinsider.com/ukraine-thousands-of-african-students-trapped-by-russias-attack-2022-2?r=US&IR=T

Shoaib, A  (February 27, 2022). “African students fleeing the Russian invasion say they have been prevented from crossing to Poland due to a 'Ukrainians first' policy”. Insider. https://www.businessinsider.com/african-students-ukrainians-first-policy-preventing-them-leaving-war-zone-2022-2