‘Justice for Thabani' campaign reaches out to the Eswatini Parliament 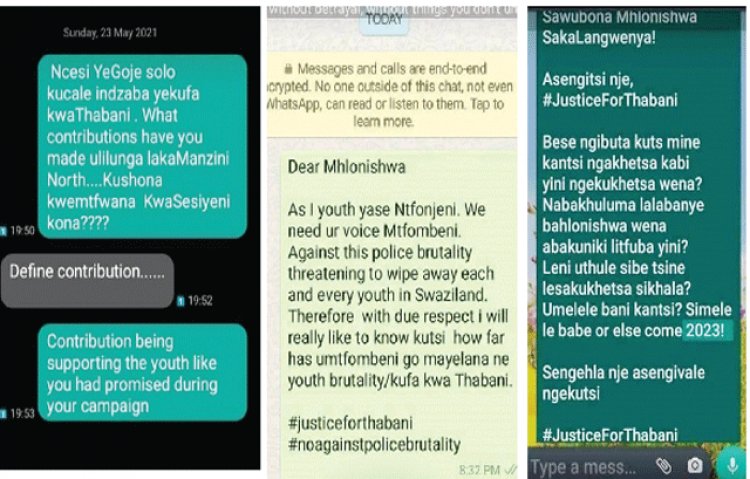 Speaking in Parliament of Eswatini on May 25, 2021, David Ngcamphalala, the Eswatini Minister of Tinkhundla Administration and Development, advised the Members of Parliament (MPs) to ignore the youths sending the MPs direct messages through mobile phones. Mr. Ngcamphalala's suggestion came in the light of the events that happened the previous day. On May 24, 2021, members of the Public Accounts Committee (PAC) of the Eswatini Parliament were flooded with messages from the youths as part of the 'Justice for Thabani' campaign, demanding justice for a law student Thabani Nkomonye, who is believed to have died at the hands of the police. The Eswatini MPs differed in their views of the public outreach. Some were willing to respond to their constituents' questions, and others promised to deal with the matter once they had gathered all the correct facts. However, what started as messages had later turned into harassment and threats. Therefore, the PAC Chairperson, Phila Buthelezi, asked the committee members to switch off their phones to stop the disturbances and proceed with the daily agenda.

The media reached for comments to Colani Maseko, the President of the Swaziland National Union of Students(SNUS), who is currently hiding in fear of being tortured by the police as one of the 'Justice for Thabani' campaign leaders. Colani Maseko refuted the statement by Mr. Ngcamphalala that the youths do not participate in the elections. Mr. Maseko clarified that the youths boycotted the last elections for their ineffectiveness under the current governing system. On behalf of the Eswatini youth, Mr. Maseko assured the government that the youths would be willing to vote in democratic elections.

Colani Maseko informed the media that the youths were preparing another protest as part of the 'Justice for Thabani' campaign.

ANOTHER CHRISTIAN GIRL KIDNAPPED ON GUNPOINT, RAPED AND FORCEFULLY CONVERTED TO...

16 executions carried out over single week in Alexandria,...