International Women’s Day: How it all started and where do we stand now? 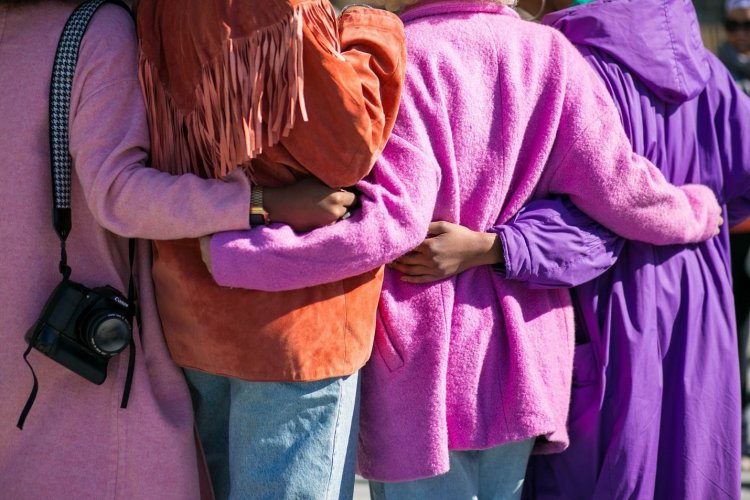 Photo: A group of women in NYC by Vonecia Carswell on Unsplash

International Women's Day is observed globally to acknowledge women's socio-economic, political, and cultural achievements. From numerous protests in the streets to giving tribute to women with flowers - this day is commemorated differently from country to country. But how did it all start?

The origins of the now internationally recognized holiday go back to the labor movement in 1908. That day 15000 women marched in New York, demanding the right to vote, shorter working hours, and better pay (United States Census Bureau). Soon enough, in 1910, Clara Zetkin suggested making this day a worldwide holiday at the International Conference for Working Women in Copenhagen. All 100 women from 17 countries present at the conference voted unanimously on Zetkin's idea, thus establishing International Women's Day (Kaplan, 1985).

Following this decision, International Women's Day was honored in Germany, Austria, Switzerland, and Denmark for the first time (Ruthchild, 2012). In addition, more than one million women and men attended rallies that protested against sex discrimination in employment and demanded the right to hold public office and vote (United Nations).

Initially, there was no specific date for this holiday; however, it was generally celebrated in late February or early March. Therefore, it was celebrated on the 19 of March in Germany, Switzerland, Austria, and Denmark, while Americans observed Women's Day on the last Sunday in February. In Russia, International Women's Day was observed for the first time in 1913 on the 23 of February, the last Sunday of the month. However, the date was a topic for discussion, so it was finally decided to mark the 8 of March as International Women's Day based on the widely adopted Gregorian calendar.

In 1917 women textile workers in Petrograd demanded an end to food shortages, World War I, and tsarism. Following the October Revolution, International Women's Day became an official holiday in Russia and was predominantly celebrated in communist countries until the second-wave feminists took it up in 1967 (Kaplan, 1985).

The Covid 19 pandemic severely affected every sphere of our lives, from health to economy, from social protection to security. However, it significantly exacerbated the position of women who are already suffering from discrimination simply because of their health. According to the UN Secretary-General's policy brief on the impact of COVID-19, women are affected economically because they generally earn and save less. Considering that women are the ones who are highly represented in the healthcare sector, they are also exposed to severe health risks. It is reported that 243 million girls and women globally have been subjected to sexual and/or physical violence committed by an intimate partner during 2020 (United Nations, 2020).

It can be said that the global pandemic took us back and slowed down all the progress made so far. This is something that was also recognized by UN Women Deputy Executive Director Anita Bhatia, who said that "everything we worked for, that has taken 25 years, could be lost in a year." (BBC, 2020). Based on the findings of the World Economic Forum's 2021 Global Gender Gap Report, there was an increase from 99.5 years to 135.6 years in closing the gender gap globally (The World Economic Forum, 2021).

Let's think about climate change and the issues of sustainability that have had and most likely will continue to have severe and long-term impacts on environments' social and economic development. We can easily imagine that once again, women will suffer the most. Since they constitute the majority of the world's poor, they are often discriminated against and marginalized. Therefore, advancing gender equality in the context of the climate change crisis can be considered as one of the most significant challenges of our century.

Gender equality and sustainable development are linked for several reasons. First of all, it is essential to build on women's agency because women have been central actors in sustainability initiatives worldwide. Moreover, if we focus on gender, we can strengthen ecosystem conservation, improve resource productivity and efficiency, and build more sustainable energy, low-carbon food, water, and health systems. Yet, the fight against climate change must not be put on the shoulders of women who already have multiple caring roles (Sustainable Development Goals Fund, 2016). Secondly, as mentioned, women suffer most from economic, environmental, and climatic stresses and shocks that undermine their vital roles in their communities and families. Therefore, it is crucial to advance gender equality in the context of the climate crisis so that women do not become the victims of it. Finally, the connection between gender equality and sustainable development is vital because it is a moral and ethical imperative.

Certainly, we have seen the promotion of women's empowerment in different regions. However, it is necessary to focus on concrete actions that would help to enhance gender equality sustainably. To adapt to climate challenges, women need access to skills, technology, and information (Sem, 2022). It is essential to break restrictive norms and barriers that prevent women's decision-making.

Today we all should take a moment to celebrate all those women and girls who are working on climate mitigation and adaptation. Their leadership and participation in sustainability initiatives result in more effective climate action. Looking at gender differences can provide the means to address social, economic, political, and environmental challenges and opportunities for pursuing sustainable development. Without gender equality, however, a sustainable future will be out of reach. Thus, we can agree that gender equality and sustainable development reinforce each other and are vital for our equal future.

An initiative to pass the misogyny to a hate crime in the...