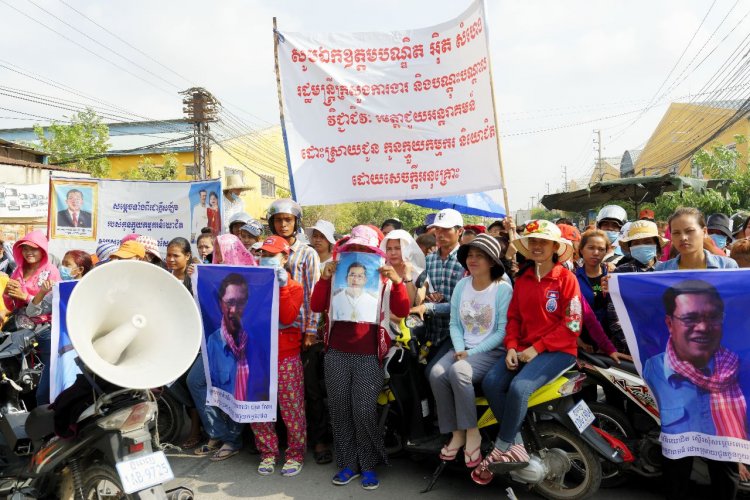 Local garment workers are seen taking part in a general strike in Cambodia | Photo by: Marcel Crozet / ILO via flickr

Human Rights Watch revealed in its report earlier this week that the government of Cambodia has been using public health measures during the Covid-19 pandemic as justifications to crack down on independent unions by jailing union members, preventing new unions from being formed, and stopping strikes and protests.

The 97-page report titled "Only 'Instant Noodle' Unions Survive" found that in four documented cases, authorities and employers had arbitrarily arrested, detained, and prosecuted union leaders and activist members or threatened to do so to intimidate them into silence. cited charges such as “incitement to commit a felony” and violations against Cambodia's Law on Preventive Measures Against the Spread of COVID-19 and other Severe and Dangerous Contagious Diseases (the "Covid-19 Law"), which was deemed problematic especially due to its disproportionately harsh penalties on those deemed to violate Covid-19 measures.

Just last year, thousands of NagaWorld workers, a casino run by a Hong Kong-based company believed to have connections to family members of the Cambodian Prime Minister Hun Sen, went on a strike after the casino laid off 1,329 workers during the pandemic. The strike also demanded higher wages and the reinstatement of eight jailed union leaders, three other jailed workers and many others who they claim were unjustly fired from the hotel and casino.

Cambodian authorities deemed the strike illegal for breaking a curfew imposed to social distance and other COVID-19 measures at the time, carrying protesters to confinement for virus testing, while also alleging that the strike was supported by foreign donors in an effort to bring down the government.

Leader of the Labor Rights Supported Union of Khmer Employees (LRSU) who organized the strike, Chhim Sithar, spent 74 days in pretrial detention based on charges of “incitement to commit a felony” between January and March 2022.

Phil Robertson, deputy Asian director of Human Rights Watch, said in a press release "the Cambodian government and unscrupulous employers used the COVID-19 pandemic as an excuse to further restrict independent unions instead of protecting worker welfare and rights at a desperate time."

The report, which was primarily based on interviews with 32 independent union leaders and activist members in Cambodia’s garment and tourism sector, also found that authorities have allowed employers to ignore labour regulations and commit unfair practices that are illegal in Cambodian and international law.

For instance, the report found that companies would continously utilize fixed-duration contracts to discourage workers from organizing and to avoid paying legally owed severance payments. Employers would terminate these contracts without justification or prior notice in retaliation for workers' union actions, as well as to target union leaders and activists. In clear violation to Cambodian labor law, the Ministry of Labor and Vocational Training (MoLVT) also issued a directive to permit the extended use of fixed-duration contracts beyond the permissible two-year maximum. Unfortunately, the Arbitration Council, which provides authoritative interpretations of the labor legislation, has also shown increasing reluctance to rule against the ministry.

The government have also used existing laws to restrict registrations of independent unions. Cambodia’s Trade Union Law, for instance, has made registering unions mandatory and imposes restrictive and burdensome requirements around this registration process. The report documents how independent unions faces tiresome processes which often includes lengthy requirements for registration. Indeed, the report found that MoLTV would frequently reject registration applications of independent unions based on small errors or misspellings. Meanwhile, trade unions that are controlled by employers or have links to the Cambodian government were able to register under Cambodia's Trade Union Law with ease.

International Day for Elimination of Violence against Women and Girls: Focus on...

Norway Files Declaration of Intervention at ICJ in Allegations of Genocide Case...

African Court on Human and People’s Rights will issue six...