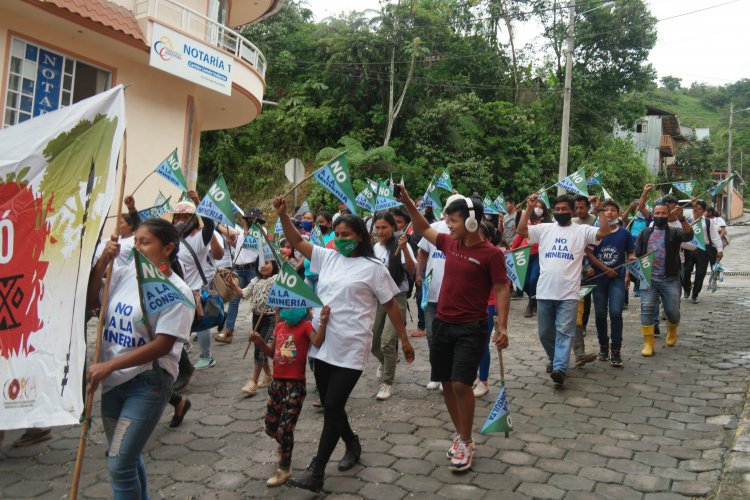 After several years of mining inactivity, Canadian company Solaris resumed mineral ore extraction in the territory of the Shuar Arutam People, in the Morona Santiago province, located in the Amazon rainforest in southern Ecuador. Backed by a pro-extractivist government, these operations violate indigenous rights to free, prior and informed consent and threaten to incite violence between indigenous groups.

Since 1999, the Shuar-Arutam people have suffered from the exploitation of their land. In 2001 serious tension broke out between mining proponents and opponents between the 47 communities, escalating into intra-ethnic conflict. Nevertheless, due to majority opposition to the mining project, the Shuar Arutam people successfully expelled corporations from their land in 2006. In 2016, new mining operations in Morona Santiago caused forced evictions of indigenous peoples. This prompted violent confrontations between community members and public forces that intervened in indigenous territory. The worsening of the situation eventually led to the temporary declaration of a state of emergency by the government which resulted in the suspension of certain civil rights and a serious limitation of the rule of law.

In 2019, Canadian company Solaris Resources acquired the license for the Warintza project and resumed mining of copper among other resources. Copper is essential for the green energy transition as it is used for the production of solar panels and electric cars. The high demand drives up the price and royalty fees for copper, which makes it a very profitable commodity. The government as well as industrial mining chambers take advantage of the green discourse around copper to promote further mining operations. Without the permission of the Shuar Arutam, 56 % of their ancestral territory is currently open for mining endeavors by Solaris and other corporations.

According to Solaris CEO, David Earle, the Warintza project is in a perfect location due to the area’s abundance of freshwater, required for copper mining. Shuar people have already reported the contamination of the Warintz river. Furthermore, copper is mixed with highly toxic substances like lead and arsenic. This jeopardizes the riverine ecosystem and the Shuar people’s access to safe and clean water. On top of that, the project has already led to heavy deforestation and the destruction of sacred sites.

Consequently, the organization of the Shuar Arutam people (PSHA) accused Solaris of violation of their collective rights and of nature. In response, Solaris engaged in further intimidation strategies, including alleged death threats to PSHA leader Josefina Tunki, to advance the Warintza project. In addition, the company creates divisions among Shuar people, again inciting tensions and violence between the communities and thereby destroying the social fabric.

To make matters worse, Ecuadorian president Lasso promotes an economy based on extractivism. In line with his policy, he issued decrees 95 and 151 in July and August 2021. The former entails the deregulation of oil and gas operations. The latter seeks to attract more investment by increasing environmental permits which grant more mining concessions. The Ministry of Energy and the Ministry of Environment, Water and Ecological Transition are also involved in facilitating the acceleration of extractive operations. Both decrees were passed without the free, prior and informed consent of the Shuar Arutam people, violating indigenous peoples’ rights. Consequently, the PSHA has already filed against the Ecuadorian government for violation of the International Labour Organization’s Indigenous Peoples Convention (no. 169).

Fundacion Tiam (2016, December 18). Legal Analysis of the state of exception in the province of Morona

Activists in Eastern Cape Against the Shell’s Plan to Survey...