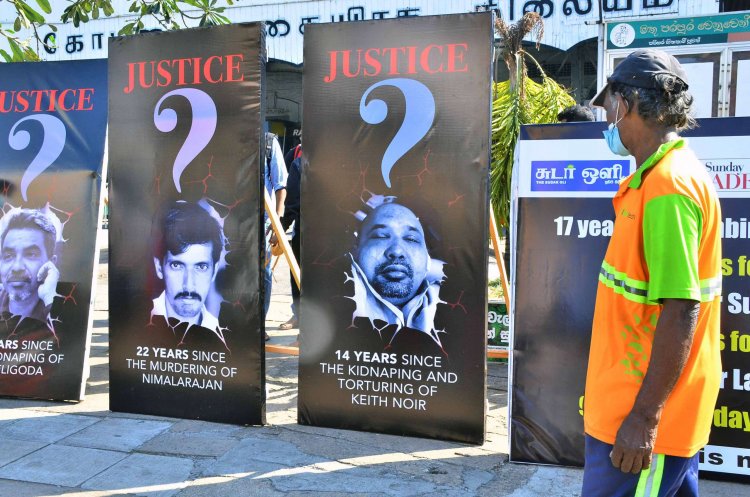 On January 28, 2022, journalists in Sri Lanka marked “Black January”, a day commemorating the “intimidation, murder and enforced disappearance” of Sri Lankan journalists and attacks against media institutions, as well as the prevalent impunity over these crimes (Tamil Guardian, 2022; Colombo Gazette, 2022).

In Batticaloa, Sri Lanka, a candlelight vigil was held by demonstrators, remembering the journalists who lost their lives and demanding an “independent international investigation” into the crimes (Tamil Guardian, 2022). In a joint statement, the organisers of the demonstration [1] alleged that journalists were assassinated for “the sole reason that they were trying to uncover the truth and defend Sri Lanka's democracy”(Tamil Guardian, 2022). Furthermore, they highlighted the lack of justice for these murders and called for the protection of current journalists. Moreover, the organisers expressed the need for accountability, stating that “[if] journalists are to continue to operate freely in this country, the perpetrators of the murders and disappearances of journalists must be prosecuted and punished. Only then will the perpetrators fear retribution for their actions against the media.” (Tamil Guardian, 2022). In Fort, Colombo, Sri Lanka, a demonstration drew attention to Black January and the murdered, forcibly disappeared or tortured journalists by putting up posters of the latter and distributing leaflets calling for support in seeking accountability for these crimes (Colombo Gazette, 2022).

In the time period between 2005 and 2015 numerous journalists were killed, forcibly disappeared, abducted and tortured in Sri Lanka; organisers of the candlelight vigil in Batticaloa document the deaths of 43 journalists, of which a majority of 35 are Tamil, under previous government regimes in Sri Lanka (Tamil Guardian, 2022; Colombo Gazette, 2022).

The Inappropriate Portrayal of Children in Japanese Manga