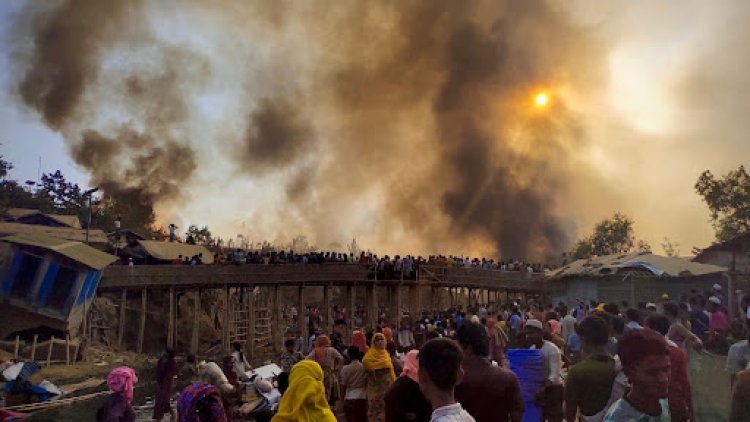 On Tuesday 8th March 2022 at around 15:30h, another fire broke out in Camp 5 of the Cox’s Bazar area in Bangladesh. This is the sixth fire this year in what is the largest refugee camp in the world, hosting over 900.000 Rohingya refugees who fled Myanmar after the 2017 military crackdown.

After this fire, a six-year-old boy had been reported dead, and an estimated 400 shelters have been destroyed, leaving 2.500 people homeless. This comes after a massive fire last January, which destroyed 1.200 shelters and left more than 5.000 people homeless, and four different smaller fires during February and March.

Save the Children’s Country Director in Bangladesh, Onno van Manen, said: “This is the sixth fire to tear through Cox’s Bazar in less than three months. Year on year, we’re seeing a huge increase in the number of fires in the camps—and the risk is only going to go up as the climate crisis worsens. “The shelters made of dry bamboo and tarpaulin are incredibly flammable. More fire-resistant materials must be permitted and additional openings in the fencing need to be built so that refugees can reach safety in an emergency”. He added that “The risk of fires in these densely populated and confined areas is enormous, but it is avoidable with the right support and infrastructure in place.”

The cause is once more unknown, but experts and civil society organizations point to the profoundly unsafe nature of the camps in the entirety of the Cox’s Bazar area. As the United Nations High Commissioner for Refugees (UNHCR) pointed out in its operational update in January, “fires in the Rohingya refugee camps are particularly severe due to overcrowding, poor infrastructure and use of flammable materials for shelters”, adding that the risk was higher during the dry season, which goes from October to June.  Save the Children cited their Inter-Sector Coordination Group Daily Incident Reporting to the effect that there were already over 150 fires reported in the camps in 2021, which marked “a staggering 180 percent increase on the 84 fires seen in 2020”.

NGOs and human rights defenders are calling on the international community to financially support Rohingya refugees in Bangladesh, while pursuing a long-term solution to this crisis – one that addresses the root causes and allows Rohingyas for safe, dignified, and voluntary return to Myanmar once it is safe to do so.

Norwegian Refugee Council (2022). Another week, another fire in the Rohingya refugee camps. Retrieved from: https://reliefweb.int/report/bangladesh/another-week-another-fire-rohingya-refugee-camps

Save the Children (2022). One child killed and 1.000 children left homeless as fire rips through Rohingya refugee camp. Retrieved from: https://www.savethechildren.net/news/one-child-killed-and-1000-children-left-homeless-fire-rips-through-rohingya-refugee-camp

“We Pay A High Price For Being A Prisoner's Family”: The Reality Of Intimate Searches...

Grazing Prohibition in Tibet Implemented Under the Name...