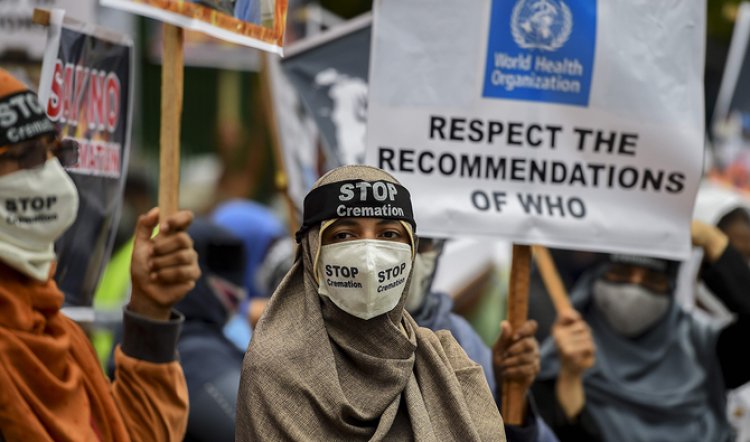 Muslims protesting the cremation of coronavirus victims of their community earlier this year. Photo: Arab News/AFP (2021).

On 17 October 2021, Amnesty International published a new report on the increasing violence and discrimination experienced by the Muslim community in Sri Lanka (Amnesty International, 2021). Accordingly, since 2013 the minority group has been subject to continuous discrimination, harrassment and violence with the adoption of goverment policies specifically targeting the minority at the pinnacle (Amnesty International, 2021). The 80-page report titled ‘From Burning Houses to Burning Bodies: Anti-Muslim Harrassment, Discrimination and Violence in Sri Lanka’ discovers the development of discrimination against the Muslim community, showcasing an increase in state-sanctioned violence and discrimination since 2013 (Colombo Gazette, 2021). It started with lobbying for the removal of the halal food certification, anti-Muslim riots and anti-Muslim mob violence mainly by Sinhala Buddhist nationalist groups and escalated after the 2019 Easter Sunday attacks [1]. Furthermore, under the current government, discriminatory policies and legislations such as the forced cremation of COVID-19 victims [2], the intended ban on the niqab and madrasas and the Prevention of Terrorism Act (PTA), disproportionately targetting minorities including Muslims, have been adopted (Amnesty International, 2021; Colombo Telegraph 2021). Amnesty urges the Sri Lankan government to reconsider their policies and the international community to take action to protect the minority communities in Sri Lanka and their fundamental rights.

[1] The Easter Sunday attacks or Easter Sunday bombings killed over 260 people in coordinated suicide attacks which were committed by a local Islamist group, later claimed by ISIS/ISL, and aimed at the Christian community in Sri Lanka (Amnesty International, 2021).

[2] The forced cremation policy has since been reversed, due to international pressure from human rights bodies, such as the UN Human Rights Council (Amnesty International, 2021).

Man Kills His Wife and Two Daughters, Allegedly for Honour, in Pakistan

After Numerous Manifestations, Pensioners Will Be Paid...